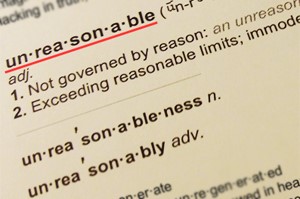 Last week David posted an excellent blog on the need to be unreasonable.

I’ve got to be honest, I’m struggling with David’s piece…not because I don’t believe in what he has to say but more because I’ve spent 30 years in education being the opposite of what he proposed. I’ve built a career on being reasonable.

So therein lies my point. I want to use my unreasonableness to change my world.

A few years ago, I found myself on a tramp in the mountains above Lake Ohau in the South Island of New Zealand. The walk into the hut looked very simple, just following a river bed. Unusually for my tramping partner and I, we didn’t have a map. This will seem particularly unreasonable to others, but to us it seemed reasonable. On Google Earth it had looked simple.

And so we did. For a long time. By the time we got to the hut it was well after dark. To be honest we only found the hut by luck as a light was shining outwards through the window.

And although this is an example of unreasonably poor planning, it’s not my point. By the time I had made it to the hut I was literally a nervous wreck.

I’d spent 6 hours in the wilderness, trudging up a river bed through the snow, doing what I consider as being very reasonable.

Deep in thought for 6 hours I ruminated over a problem I was having at school. Just one problem. To be fair, it was a pretty serious problem regarding one of my teachers. If I was thinking logically I would never have started thinking about the problem. I was never ever going to resolve this anywhere but at school, during term time, and with the teacher. But over and over again I attacked the issue. I picked at it like an open sore. The mountains soared around me, but I found new depths in my thinking during those hours. Physically I was spent when I made it to the hut, but it was my mental state that was worse. My whole tramping weekend became darkened by this rumination. For all intents and purposes I might as well have stayed home.

I didn’t take in much of the beauty of the mountains. I didn’t stop to enjoy the fresh air or the excitement of the trip. My rumination closed in around me like a dark cape and that’s where it locked itself to me. The school problem, one problem only, doing what I thought was reasonable, gnawed away at me. It became a miserable time that was the straw (albeit a heavy one) that broke the camel’s back. It led to a diagnosis of depression and a period of my life on antidepressant medication.

Reasonably, in my eyes, I have sadly continued this pattern. Always on weekends and on holidays, I’ve let school/work problems take roost during idle times. I’ve allowed this. I’ve made this a habit and a pattern and because of this, I’ve secured this thought process in concrete all in the name of reasonableness.

My battle then with what is reasonable and what is unreasonable is a battle with myself. It’s not a call to arms against the Ministry of Education or against those children or families who routinely push my buttons and attempt to walk all over me. No, it’s a battle within which I have to beat first.

My progress, and ultimately the sustainability and longevity of my role as a principal, now depends on me being unreasonable. If I am going to break the status quo then I need to be unreasonable with myself. That means finding ways to avoid thinking about school when I don’t need to. Distraction activities are useful for this, but it takes practice and a determined mind to a:) know when your mind has reverted to a school problem and, b:) guide yourself back to just living (and enjoying) the moment.

So in a quirky sense, to be reasonable in my own individual well-being I actually need to start acting unreasonably!