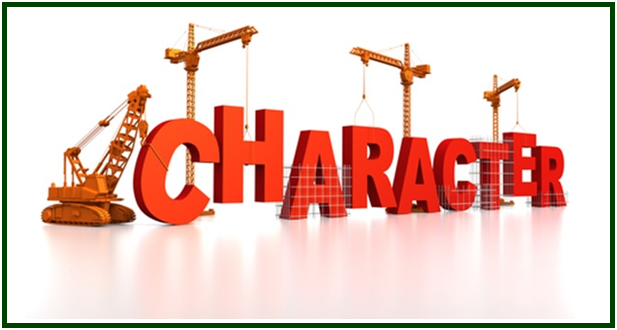 Growing up, my Dad had lots of great advice for me. Two pieces have stuck with me through thick and thin. One he pulled out for the first time during our very first time playing golf together (and last as well now that I think of it). As he swung backwards and forwards wildly missing the little dot of a ball at every sweep, he yelled out mysteriously, “There’s method in my madness!”.

At the time I was about 18 and I’d never heard that saying before. I really thought he was as crazy as his swing.

Over time I’ve learnt to recognise my own method in my madness, in particular in things that I do in my professional life. Case in point when it comes to taking a look at things that get me down as a principal and I find myself taking a close look at my character.

Which leads me nicely to the second thing he used to say. Invariably whenever I had stumbled, which was often, he would say; “Don’t worry Steve, it’s character building”.

Again, because he was my Dad, and I was just young, I had no idea what he meant.

Again as I’ve stumbled my way through principalship, his words have taken on a new meaning.

Even more so, recently, when I heard an addition to my Dad’s saying:

In recent times this has resonated with me. I’ve seen fellow principals and leaders find themselves in times of trouble and mistakes have been made. I’m not immune to this. Every time I make a mistake, put a foot wrong, or find myself in trouble it’s not my personality that will get me through. It’s my character.

Your character is often you at your rawest. Interpreting what that means to you can be confronting! Especially at 3:00am.

Knowing your character is one thing, but understanding it is another thing altogether.

Epictetus, a first century philosopher, once said, “people feel disturbed not by things, but by the views they take of them”.  Put simply, thoughts cause feelings and behaviours. Case in point with your character.

Your character is your bedrock. It’s both what makes you strong as metal and as flaky as the dust in the wind. You’re likely to feel great about your own character when you “dig deep”, “hold strong”, “lean into the wind “ but feel like a loser when you “cave in”, “break down” or “ lose the plot“.

Truth is though, it’s not your character that is actually at fault, but the feeling that you assign to it that makes you feel at fault. Put it another way – unless you’re thinking about it and you’ve assigned a feeling to it then really it means nothing at all.

So when you get into a situation that involves you taking a closer look at your character, be careful not to assign too many ill feelings to what you see.

This is the crux of the matter when it comes to character building. Train yourself to know your strengths and flaws, because they are what make you human. No one is perfect. But also find a way to train yourself not to assign a feeling or emotion to all of them.

Think of your mind a little like a Facebook or YouTube algorithm. It keeps on showing you similar stuff to that which you’ve been looking at – or in this case with your mind, what you think about. Think of each thought as being a bit like the LIKE button. This tells your algorithm to give you more of the same. That’s a useful way of explaining why you tend to replay and remuniate over events again and again.

This takes some superhuman-like abilities though to avoid. As I’ve written often, I’m not always great at nailing this.

Anthony Metivier in his rather dry TED video entitled, “Two Easily Remembered Questions That Silence Negative Thoughts”, (watch from about 7 minutes in!) comes up with a bit of a solution. He suggests that as your thoughts come in that might question your character, ask two simple questions.

Is that thought useful?

How does that thought behave?

Next time you’ve had a particularly crappy day at school, and everything has turned to custard and you find yourself starting to question what your character is really about, ask yourself those two questions about the thoughts that you are having:

Are these thoughts useful?

And how do they behave?

Bear with me as I explain this next bit, there is a little method in my madness here, as my Dad would’ve said!

So the other night as I lay in bed, questioning my character after a series of failings, and the thoughts began to flow in waves like they do, crashing against the rocks, I decided to run an experiment.

Not that I have any experience in Tinder like dating apps, I decided to view my thoughts as though I did. As my thoughts flew in I purposely looked at them from a slightly removed perspective. I swiped them left or right as I asked the questions, is this thought useful, and how does it behave? If I caught myself in the negative I swiped them away, instead dwelling in the positive and useful thoughts

This little exercise might help you strengthen your character, and might well help you get a better night’s sleep at the same time.

And if you can get your head around that, then that’s definitely character building.

See, I always thought there was method in my madness.