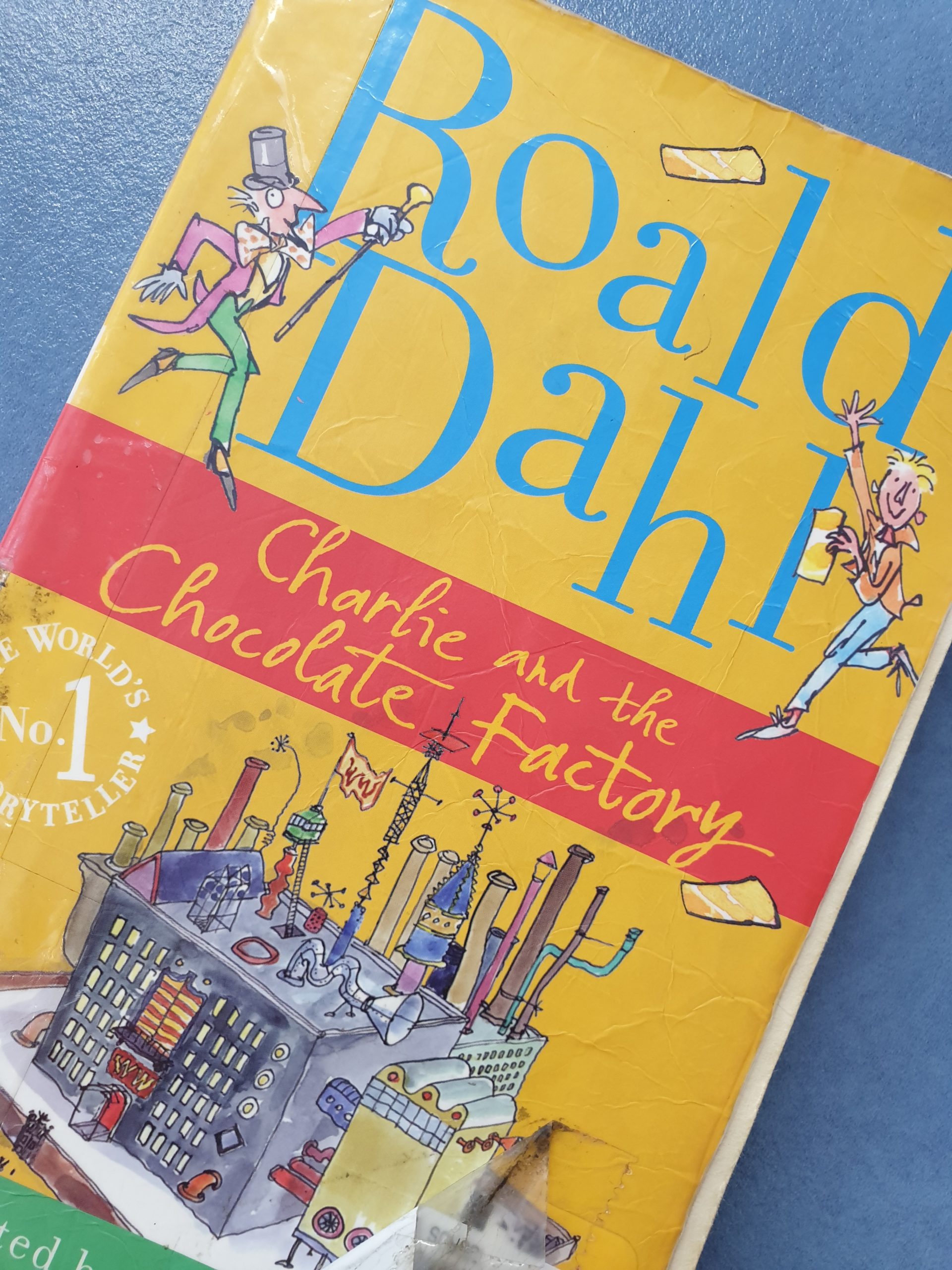 A few weekends ago I was hanging out in a Dunedin op shop looking for second-hand books. In a pile that had no real purpose or description sat a copy of Donkeys Egg, the junior reader that I read at school when I was a six year old. I was amazed at the release of positive emotion that I got by just picking the book up and flicking through the pages. Back then the words made no impact, but the pictures did, and for a brief moment I was transported back in time to my own story that I had made up to accompany the pictures. A time when I was allowed to make my own limited decisions about stuff, any stuff.

This thought led me to one of my favourite memories of primary school – lying on my back in the grass of the back field at Redcliffs school in Christchurch, watching the cotton ball like clouds drift over the cliff face, listening to the wonderful tone of Mrs Smith reading a book – a brand new book called Charlie and the Chocolate Factory by Roald Dahl.  As an 8 or 9 year old it was a magical time, so simple, yet almost enchanting. Yes, my whole world waited for me to explore it, but all I had to do was lie there and listen to the exploits of Charlie, Uncle Joe and Veruca Salt. That was the only decision I had to make. To lie there and listen, and so I lay there, and I listened. Perfection.

Fast forward a few crazy years and here I am, still in a primary school. And to be honest I yearn for that time when I had only one decision to make, just to lie there and listen to Mrs Smith read.

I really hope that all the decisions I make as a principal, day in and day out, have the same effect though, and that there are many pockets of children in my school also enjoying similar “mono decision” Mrs Smith-like experiences. Imagine that. Perfection.

Let’s talk about decisions though for a moment.

This is fine. It’s our responsibility to make decisions and for the most part, it’s both our privilege and pleasure. However, there is a limit to the number of decisions any one human (let alone a Super Principal) could (and possibly should) make in any one hour, day, week, month or term. That number isn’t finite. It’s not that we can say, “that’s it, I’ve made my 24 decisions and I’m out of here”.

Google it. Suddenly it is everywhere. Everyone is writing about it, including yours truly!

Jory MacKay in his piece “Decision Fatigue: What it is and how it’s killing your focus, motivation, and willpower” describes Decision Fatigue as; “the deterioration of our ability to make good decisions after a long session of decision making.” And “the more decisions you need to make, the worse you’re going to be at weighing all the options and making an educated, research-backed choice.”

Gulp! As a principal I make so many decisions everyday. No doubt you do as well. For this blog piece I was going to make a record of the number, but then, with a certain irony, I decided not to.

I’ve got to be honest, this is a concern for me. I find that the more decisions I make, especially at the sharp end of the year when the important decisions around staffing, finances, class lists, reports and behaviour are made on a daily basis, the more stunted the process becomes for me. There are times when even the idea of making a decision can be anxiety inducing. I really yearn for just that one decision … to lie in the grass and listen to Mrs Smith read Charlie and the Chocolate Factory!

So, what is the work-around here? How can you continue making decisions, but not slip in your ability to make good decisions. Luckily Google has a few answers and I like the following, in no order of importance, that I’m going to try myself. Maybe you’ll do the same.

And what about Decision Fatigue recovery?

First of all, look after yourself. David pulled out a wonderful line in his piece last week when he said, “Slow the heck down. You need to (temporarily) step off the hamster wheel and sit out to the side on a lilypad”.

If you’re finding yourself swamped, then give yourself time. Take a quiet walk around the school (pretend to do a playground inspection if needed); leave school early; do something just for you; make some decisions that only affect you (such as go buy a coffee, or shout yourself a lime thickshake). Take an afternoon nap. Just give yourself a break.

One crucial solution is to put yourself on a strict low information diet at home for a little while. This means forgetting about social media, or the news, or anything that’s going to encourage you to make many decisions – e.g. what to click on, who to respond to, what to say. Eliminate that noise from your life for a while. This will do wonders for you both at home, and when you get back to school to make those tricky decisions that have been weighing you down. Try it.

Of course, few of the decisions in your role will ever be so important that they have to happen right then and right now if you’re not feeling quite up to it, so don’t feel guilty about taking some time for yourself.

Which reminds me of a story I heard when I first became a principal in a sole charge school. The principal in the neighbouring school had just retired. He told me of the principal before him who used to get sick and tired of making decisions about which school bills to pay. So, as they arrived, he’d take them out of their envelopes and throw the accounts into a box. Once a month he’d close his eyes and pull out five or six from the box and he’d pay those. Simple accountancy. Imagine making that sort of decision today!

Right, I’m off to find a patch of grass to lie on, to look up into the sky at the cotton ball clouds and the blue sky and to reminisce to a time when I only had one decision to make at a time. The class lists can wait for fifteen minutes. Thank you Mrs Smith.