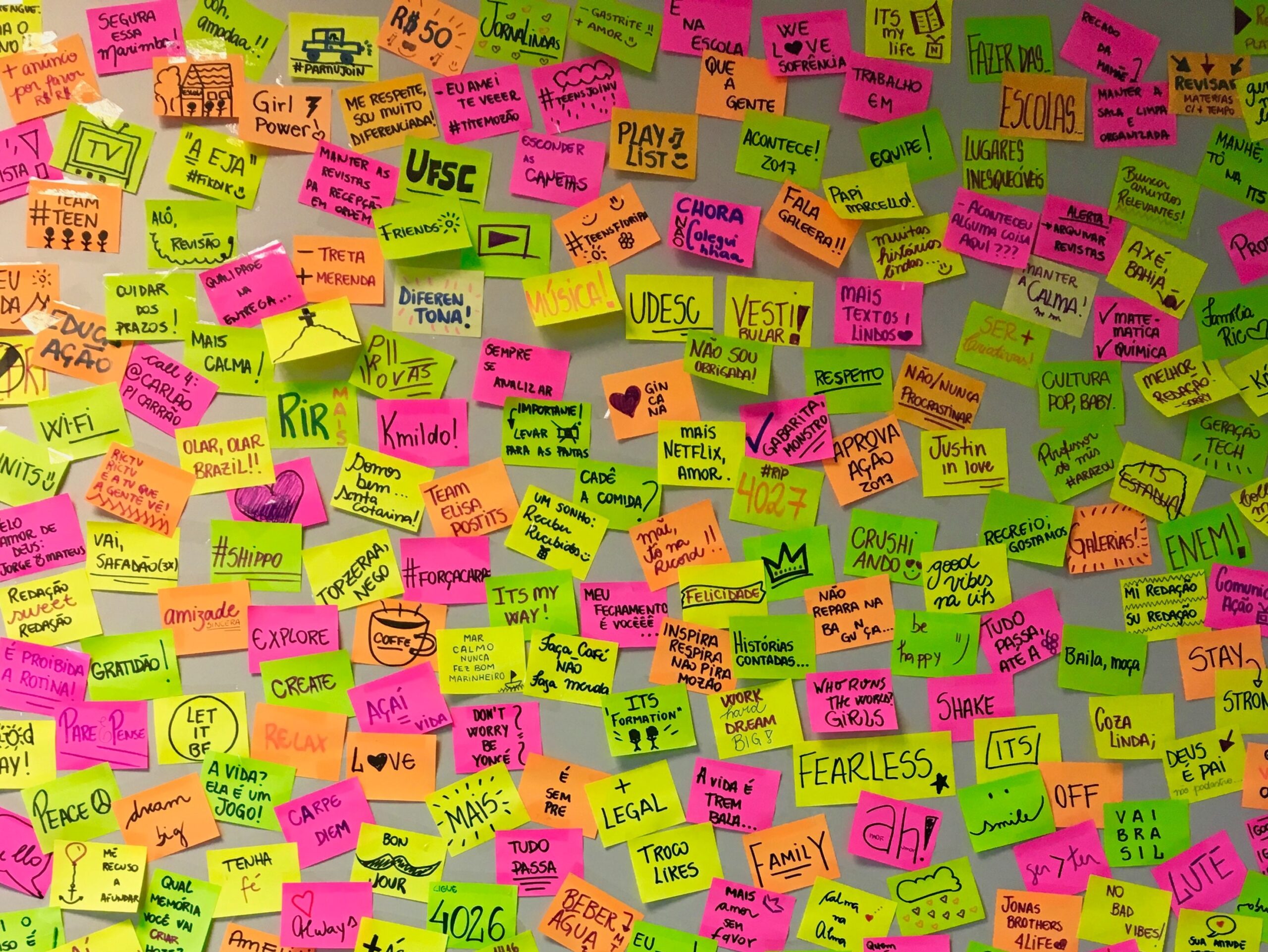 I like Post-it notes. I like the way they let me capture a task then park it until I’m ready to take action.

Way back at the beginning, I had a principal who carried a small notebook in their top jacket pocket. Anytime you started talking to them they took it out, ready to make a note if needed.

This principal prided themselves on following up, not forgetting, doing what they promised, and in their pocket was a system to make all these things happen.

Post-it notes are my version.

Sadly, while they are an awesome fluro coloured tool, the reason they are in my thinking right now is that they’re multiplying – very quickly! And lots of notes means lots of things to remember and do.

Welcome to the end of Term 4!

This is the time each year where a myriad of tasks and looming deadlines make it very possible that your waking hours are consumed entirely by knocking off task after task. Those of you who have followed the 40 Hour Project for a while, know that this is the time when the ‘busy’ can obscure the ‘important’.

Even the students seem to unwittingly contribute. There are more plasters given out and more social interactions to manage than at any other time through the year – people are getting a bit frazzed.

I spent precious time this morning helping 3 great young boys resolve an issue that started with someone holding a door handle and ended in tears. None of them planned the debacle, and all regretted it, but it does sum up the vibe of late Term 4 – stuff  happens.

In amongst this end of year race is your opportunity to be a leader. To focus on people first, spread the calm, and to deliberately aim to finish the year with energy left over and feeling well. We have talked about this before – Madvember Doesn’t Have To Be – but this time I want to focus on the power of calm.

To impact your team positively a key is to manage perception. I like the duck analogy where they are paddling like hell under the water but up on top all looks serene. It’s the bit on top that your people will notice.

A personal strategy I use to try and spread a sense of calm, is to deliberately move slower the busier I feel. This may sound simplistic but it absolutely helps – body language is the language that people notice most and if you are moving around your site in a rush, it sends a message. So slow down and breathe. Stop to talk with kids and adults, volunteer to cover someone’s duty,  and at all times move slowly. And it’s not all acting – research shows slowing down and breathing properly changes your mental state. A win/win for you and your school.

Which brings me to where I started with the Post-it notes.

I realized that when they’re plastered all over my desk/laptop/office, they tell a story to all who see them. They visually create a similar effect to walking quickly everywhere with no time to pause. They create the impression that I am busy.

So here is my cunning plan –  I’m not going to stop using them, I’m going to hide them.

At the very least I get great pleasure from screwing them up and chucking them in the bin when actioned. I’m not willing to forgo that goodness. All I am going to do is stick them inside a plain manila folder. The folder will sit on my desk closed. The notes live on but the story my desk tells will be different. A small, but deliberate action in the face of the run to the finish. Dare you to try it. 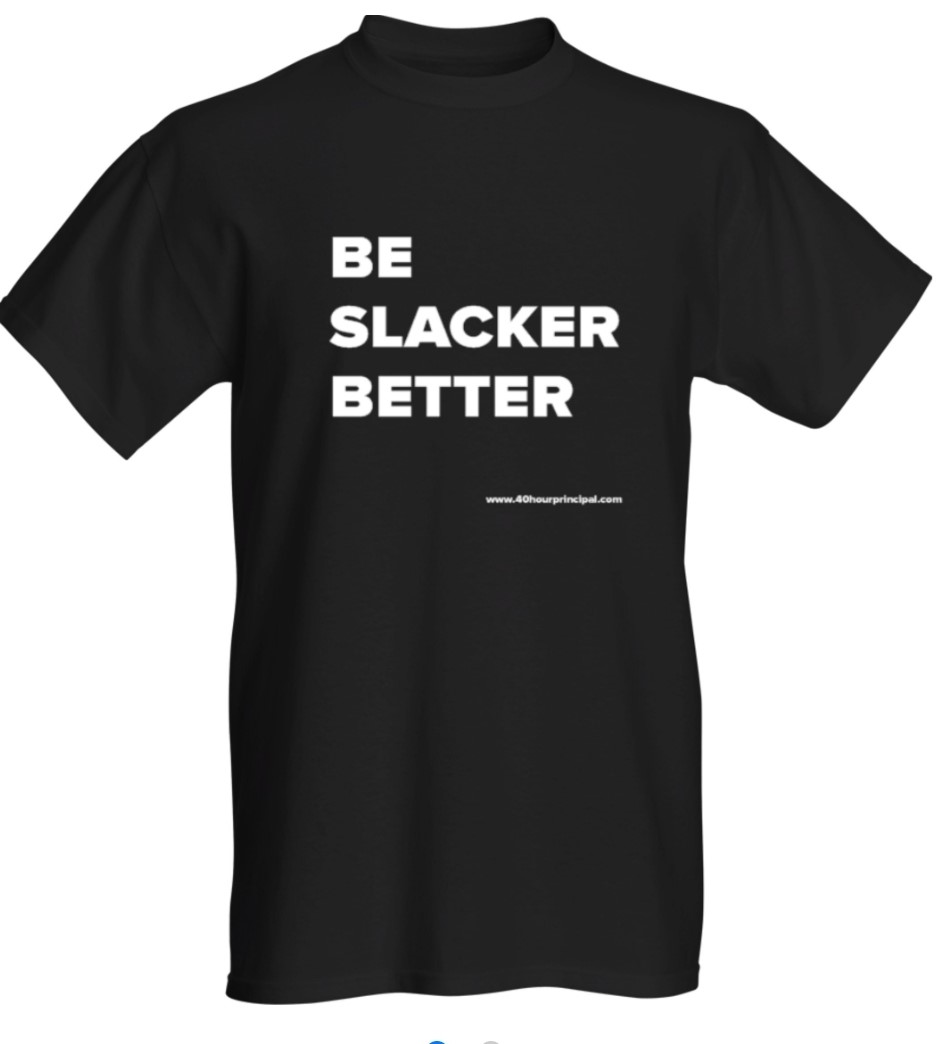 The other day I found myself looking over my wife’s shoulder as she viewed a clip on line from comedian and TV personality Miranda Hart. Some of you may know her show, “Miranda”.

Miranda was talking about life in lockdown and the pressures, stresses and uncertainties that this created for everyone. And then she quoted a guy called Dave Hollis which really took my liking;

“Hear this: in the rush to return to normal, use this time to consider which parts of normal are worth rushing back to.”

Bang! Wow! What a great thing to say. And on he went;

“If things go back exactly as they were we will have missed the opportunity to take the good from this bad.

The gift nobody’s asked for is sitting here for us all to open — an opportunity to do some housekeeping in where we focus, who we spend time with, what we consume, how we work, what matters and most importantly what doesn’t.

Take notes. We’re getting a lesson we cannot forget when things return to normal.”

I liked what this guy Dave was saying.

On his Facebook page, he describes himself in this way; “Every day Dude, In love with Rachel Hollis, Dad x4 Dominating the roads, NYTimes best selling author”

I like this description greatly. I don’t even know the guy but in a very small precis he’s told me he’s not a big noter. He’s just an every day guy who loves his wife and family. Oh, and he’s a NY Times best selling author – but that bit comes last.

It resonates with me because it’s essentially what David Armstrong and I have been promoting in the Forty Hour Principal project over the last year. We spend so much of our time in our professional lives leading, sorting, being accountable, mentoring, writing screeds of words, connecting, relating and being “fully there”. By the time it’s time for our other life, when we leave school each day, there’s so often little left but to collapse on the couch and nap away the evening in a state of exhaustion. At present I imagine that our professional Facebook pages would all read like mine; Steve Zonnevylle, Principal. Full Stop.

I want to be more like David Hollis’ Facebook precis. I want any description of me to start with the most important things. I want to be proud to be a principal, but I don’t want it to define me. As I’ve said in previous posts, I want my principalship to be a part of who I am, but not all of who I am.

Last year, the other Dave (David Armstrong) wrote a great piece in our book “The Forty Hour Principal” called, “Be Slacker to Be Better”. Like the title of our book, the notion of trying to be slacker than normal in our roles is totally alien (as is the notion of actually working a forty hour week).

For most, using the words ‘slacker’ and ‘principal’ in the same sentence is akin to blasphemy. Recently we were asked to present at a meeting and we were keen to call our talk “Be Slacker Better”. However, the organisers quite rightly pointed out that many would see the notion of this as being almost disrespectful or rude. We could see their point.

So what is the point that we’re trying to make, and how does it relate to Dave Hollis’ invitation of not rushing back to normal?

Being Slacker Better is a call to arms. And when better than now, when we all have a bit of time on our hands to think things through to start to consider what a new normal might look like.

Plenty of people are talking up the premise that education will be different when we get out of isolation. If that is the case, then we should also be talking about the role that we play, and how we play it as principals.

We certainly aren’t advocating becoming slack. Instead, we want you to step up and look at the way you do your job. Take time to look at the habits you’ve bought into over time.  Take time to assess the way you want to live your life. Big questions. But you’ve got some time on your hands, so why not do it now?

The list goes on, and is limited only by the questions you ask yourself. In the end, Being Slacker Better is less about some internalised concept of slackness, and more about finding those things that are actually the most important and getting to them more often by being efficient.

So to paraphrase Dave Hollis; in the rush to return to normal, let’s use this time to consider which parts of normal are worth rushing back to and change those things that are not.

(What do you think? Add your voice in the comments below, or over on The Forty Hour Principal Facebook page.)