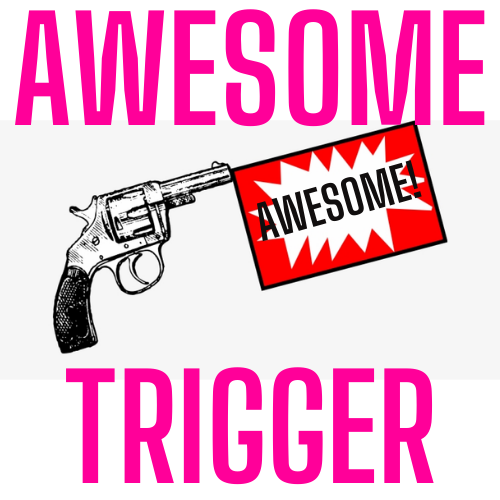 Someone said at the end of last week … “Man, it’s been a long term!”. Yes at that stage we were only two weeks into the Term, and yes, that someone was me, but yup, it had been a long term already.

Three weeks in and I’m already looking for my awesome trigger.

Awesome trigger? Yes, I’ve just made that term up. If you google that you’re not likely to get anything to help you define what I’m talking about.

So let me explain.

As I’ve already said, it already feels like it’s been a long Term.

I’m not necessarily in the totally fried camp, but I can feel the pressure amping up. I’m hoping that there are others out there just like me.

There’s the uncertainty of Covid that has been lingering now for far too long, and it’s mixing with all the usual culprits – people, finances, relationships, property. In the mix now is the NZ Curriculum Review, Aotearoa NZ Histories, Literacy and Mathematics short comings, Learning Support changes …. Basically all the system change things that I talked about in my last blog piece called Epic that we have little control over but are still expected to grin and bear it.

I’m not helping things because when I find myself in this sort of situation,  I tend to make it worse by overthinking it. For me, this results in two key things:

These link very well together, as they naturally like to feed off each other. They really are two evil like twins.

For me, Catastrophizing doesn’t result in a call to arms, “let’s get this done!” sort of mentality, instead it leads to procrastination. I find myself avoiding and putting off things – even things that should be really quick. Which in turn leads to more catastrophizing because I’m very effectively NOT doing what I should be doing.

Essentially when I do this I’m in Would’ve, Should’ve, Could’ve, Didn’t mode. There are times in your professional life when the Would’ve, Should’ve, Could’ve, Didn’t mode is a useful and practical way of doing things. There’s certainly times when it’s advantageous to push the pause and wait. But when it’s linked to the two evil twins of Procrastination and Catastrophization – well, it’s not going to end well.

There are several reasons why we catastrophise (yes it is a we, I’m not alone in this I’m sure!). We just do it on different levels.

For me these basically fall into three main categories:

Ambiguity: When there’s a little confusion or uncertainty and vagueness about a message. For example, “Mrs Brown is on the phone and wants to talk with you”. Or you receive a text; “we need to talk”. Or the Ministry of Education rings. This can open a can of worms in your mind.

Value: Relationships and situations that we hold in high value can result in a tendency to catastrophise. When something is particularly significant to us, the concept of loss or difficulty can be harder to deal with. If a long serving staff member leaves, it’s the sense of uncertainty regarding how you’ll replace that person that leads to the catastrophizing. Especially if you have valued that person intensely!

Fear: Especially any irrational fear. I’m often scared of going to the dentist. I always start to think about all the bad things that could happen to me in the dentist chair … and, how much it is going to cost me! Fear also affects people in school settings. Being “sent” to the Principal’s Office for example!

Scarily, Procrastination also can fall into these three categories

Ambiguity: I’m really vague and unsure about what I should be doing. What is the purpose of this?; Who am I doing it for?; Where is it all going to lead?; Do I really have the skill to give this justice? This leads me to putting things off.

Value: Maybe you value the work so highly that you don’t want to stuff it up. So you put it off. Or maybe it’s the opposite; you don’t see the value of the work at all. Either way it has an effect on your procrastination.

Fear: I certainly have put things off because I have feared the outcome. There is no ambiguity here, it’s definite! I know exactly what is going to happen, and it scares the hell out of me. So I avoid the pain by putting it off. It’s not a great place to be. It feeds beautifully into catastrophizing as well.

So what is the work around? To be honest, I wish I knew the one thing that would fix this for good. I’m yet to discover this though.

I do believe however, that this catastrophizing/procrastination cycle is a habit. It’s something that I’ve led myself into. Why? Well, I’m not a hundred percent sure. But I’ve got to admit that catastrophizing a situation never actually helps anyway.

“Next time you have a what-if thought, remember to tell yourself that you can handle anything that comes your way. Try to think about the worst-case scenario and whether you could handle it. Be realistic. In all honesty, there is no doubt that you could. Then ask yourself whether you truly believe this what-if thought will actually come true. The answer is, probably not.”

Another crucial point here is to understand what your own thought patterns and habits are. It means being ultra aware of when you are in that negative mindset of jumping to the worst conclusion, and then finding the switch to turn it off. One way of switching this off is by using what I like to call my Awesome Trigger.

One of my favourite quotes goes “When I’m sad I stop being sad and I be awesome instead”. It really is a lovely one liner. Apparently a fictional character called Barney Stinson said it on the sitcom “How I met your mother”.

For me I use my Awesome Trigger a bit like a personal electro-shock treatment, without the electricity or the shock! Being awesome instead of sad is, of course, an oversimplification of what has to happen when you’re knee deep in serious crap. However for me, this quote sits above my laptop on the wall in my office, and it is a call to arms for me to start being creative. I’m happiest when I am creating.

Your “awesome” might be something entirely different. It might have nothing to do with being creative. The point here is that when the job is getting you down, and you find yourself in some sort of nasty twin evil catastrophizing/procrastination negative whirlpool like cycle, then trigger the recovery by going to the thing that makes you feel awesome. That’s not a can of beer or a bottle of whiskey. Those sorts of things aren’t recommended, especially in a school setting!

Here are a couple of examples recently of what I did when I found myself in that negative loop:

1. One of my Principal Appraisal comments says I should think about adding a risk management component to my Board reports that takes in personnel and finance risks.

Procrastination level on this idea – HIGH! That sounds like a bore!

Catastrophizing level on this idea – MEDIUM – what if I don’t do this, how will it look to my Board?

My Awesome trigger? – take the boring template I’ve been given as an example and “punk/pimp” it up a little using CANVA, the computer app that I love. Yes it’s still boring, but I get to put a little bit of Steve into it.

2. Teacher comment says I never get out of my office to be with the kids. Apparently it’s like I’ve been stuck there since COVID.

Procrastination level on this statement – LOW. I do want to get out of the office and be with the kids. The office sucks!

Catastrophizing level on this statement – MEDIUM to HIGH – there’s so much other crap that needs to be going on in the office – and I’ve got to run the online assembly, and there’s the COVID stuff and, and, and …. If I don’t do that the place will fall apart.

My Awesome trigger? – get out of the office! Take my camera and microphone, and go and interview some kids doing Rippa Rugby so that I can present it at the online assembly. I’m creating and I’m enjoying being with the kids, and they get to see themselves being the stars they are. As for the COVID stuff? Well I got inspiration from a fellow Principal who told me she still hasn’t written up a flash Covid plan that the Ministry was asking to be written late February.

3. Sometimes you find yourself in the negative loop for too long and all you hear in your head is a song by Joy Division called “Love will tear us apart”. That song starts off with the very hopeful (irony!) line of “When routine bites hard and ambitions are low”. This is a time when you need an intervention from a colleague, mentor, buddy to help you find your Awesome Trigger. Sometimes this is a conversation (always done best face to face, over a coffee or a beer) that is a kick up the butt sort of conversation. They’re fine. But because it’s from someone you respect then the conversation will always give some sort of clarity – and that’s a circuit breaker in terms of ambiguity shifting with the evil twins.

1. What is truly bothering you? What is the root of the problem? This can help you to slow your thoughts down and get back into reality.

2. What is it at school that truly excites you? This is your Awesome Trigger. Use it to show off your awesomeness!

And remember, we are not the sum of our thoughts. We have control over our thoughts and that very few, if any, of our negative ones ever  come to pass.